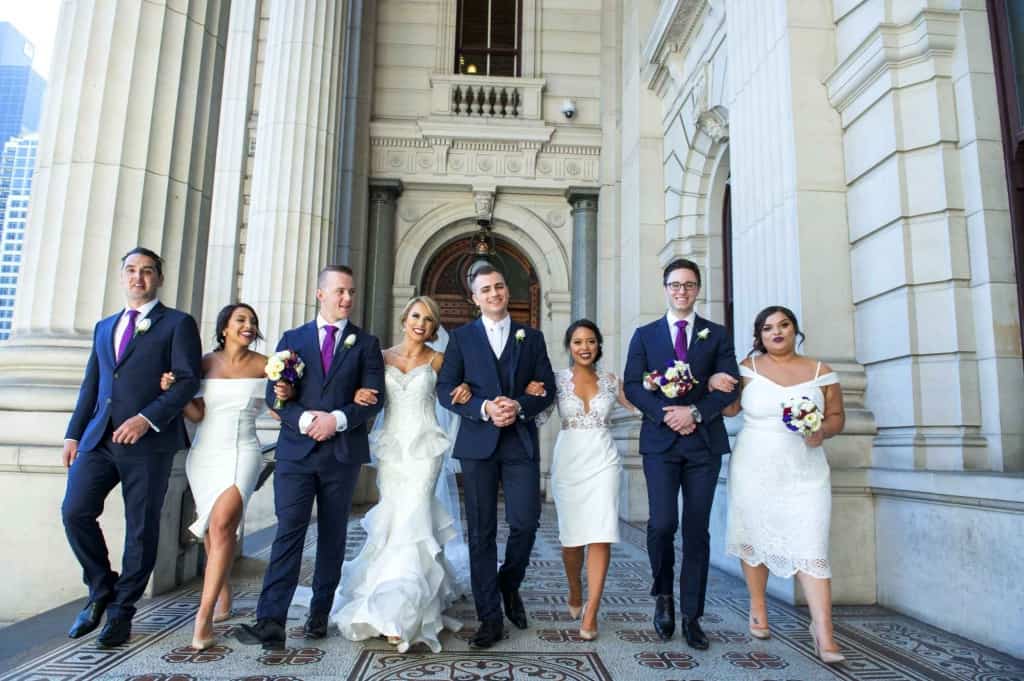 Parliament House and Melbourne wedding photography have almost been seen as synonymous with each other in some quarters! Tradition, desire, the magnificent façade, perhaps notions of democracy, who knows what it is, but there would not have been a Melbourne wedding photographer alive who has not frequently climbed right up the grand flights of steps to photograph in the entirely grand and beloved surrounds of the portico of Parliament House. Year after year, decade after decade Parliament House never goes out of style.

At Vogue Ballroom we appreciate the classic columns, the luxurious (and clean) marble mosaic floor, with Roman origins clearly flagged, even the high Victorian iron lights and the carved doors can’t quite shake off the sensation of being located the Forum (centre of the ancient city state and the known world.) If you listen closely perhaps the voices of the Imperial Senators might momentarily rise above Spring St traffic — certainly this was the vision of the young colony ambitiously reaching past the British Imperium to something altogether more important and fundamental. Even if today ancient seats of Roman and Greek democratic governments are also only a place of grass and broken stones and harried tourists; the real life of the Forum pulses here now– temple colonnades, porticos and pediments are but an architectural shorthand for the system of government bequeathed to us and embraced by us in all its traditional pomp, rude shortcomings and ancient glory.

Parliament House is one of Melbourne’s best known landmarks. Its history extends back to the colonial years of the Victorian state. In 1851, even before the colony of  Victoria had acquired full parliamentary self-government, Governor Charles La Trobe instructed the colonial surveyor, Robert Hoddle, to select a site for the colony’s new parliament to meet. Hoddle selected a site on the eastern hill at the top of Bourke Street which at that time, when few buildings were more than two storeys high, commanded a view of the whole city.

The exact sequence of events is unclear, with a number of architects and designs chosen and rejected in succession, with the final result possibly based on earlier work. The first design appeared as early as 1851 by then Colonial Architect Henry Ginn, however the Legislative Council then decided to have a competition in 1853, which Ginn took as a slight and resigned. A design by Smith & Pritchard won first prize, but this was soon set aside as well. The Colony's newly arrived Chief Engineer (from Nov 1855 Commissioner of Public Works) Captain Pasley was asked to prepare a design by April 1854, possibly for a unicameral building, which may havew been soon reworked into one for a bi-cameral Parliament, which had just been decided upon. A design was published in c1854 showing a restrained Palladian building much like the recently started State Library of Victoria credited to Knight & Kerr "under the general directions of Captain Pasley". John Knight and Peter Kerr had just formed a partnership, and Knight had been and may possibly still have been an architect within the Public Works Department at this time, while also practicing privately. This design was also apparently deemed unsuitable, and Knight & Kerr were employed separately to create a much grander design by 1855, which was perhaps mainly a reworking of the 1854 design. This design is extraordinarily impressive and elaborate for a fledgling colony, albeit one flush with the results of the recent gold rush, featuring with a columned screen on at least three sides, with end and central bays set forward, statutory atop the cornice, grand stairs, and a tall multi-stage columned and domed tower. Images of this design were also published, and photographs exist of a model of the scheme. Knight & Kerr are credited with the design of the first stages of Parliament House when construction commenced in 1855.

From 1901 to 1927 Parliament House was the first home of the Commonwealth of Australia's Federal Government, since the new capital city envisaged in the Australian Constitution did not yet exist and there were long delays in finding a site and commencing construction. During these years the Victorian Parliament met in the Royal Exhibition Building in Carlton.

Many of the major events of the early federal period took place in this building, including the formation of the Federal Parliamentary Australian Labour Party, the "fusion" of the Free Trade Party and the Protectionist Party into the first Liberal Party in 1909, the declaration of the Great War in 1914, and the split in the Labour Party over conscription in 1916.

Despite its protracted construction and evolution of the design, the building today feels very much a single entity. The flow of the rooms, particularly taken in context with the main façade leading to the Queen’s Hall and the parliamentary chambers, is both logical and visually impressive.

The warm golden tones of Parliament House’s exterior, and its abundant list of architectural features such as corinthian columns, hand carved sculpture reliefs, ornate balconies and the grand stone staircase, lend themselves spectacularly to classic and elegant wedding photos.

One of the features that makes Parliament an evocative destination, particularly for those from overseas, is Melbourne’s trams. The city circle tram is decorative in attractive colours for wedding photography, and many tram drivers are willing to wait for a couple of minutes so that we can offer a couple some iconic Melbourne images.

Because of it’s proximity to various beautiful locations, Parliament House is one of Vogue Ballroom’s  favourite places shoot classical wedding photos — or perhaps to update it with a combination of old and new with a contemporary themed shoot. Near to the Renaissance inspired Old Treasury, and the lush Treasury Gardens, as well as Gordon Reserve, Parliament House allows the photographers at Serendipity Photography to capture your magical moments. The Stanford Fountain, a gorgeous Baroque inspired fountain in the Gordon Reserve, creates lovely gothic inspired photos. Just behind it, the Hotel Windsor stands, that paragon of Melbournian grace and luxury, and the Princess Theatre, which Serendipity Photography loves to shoot in soft romantic photos.

The largest 19th century public building in Australia, Parliament House on the corner of Spring Street and Bourke Street is one of the finest examples of civic architecture from the colonial period of the British Empire anywhere in the world. With it’s classical colonnade and portico, the building commands a majestic position at the head of Collins Street, and creates an impressive background for wedding photographs. Parliament stands host to many other nearby wedding locations, and is a useful start to a winter, wet day or short day wedding location tour.

The influence of the Renaissance is clearly seen in the ordered and rational façade, the classical columns, and the beautiful pale stonework of Parliament House’s front colonnade. Inspired by classical Greek and Roman art and architecture, the Renaissance artists created works of masterful rationality, which in Parliament House has been translated into a revivalist perfectionism that stands proudly in the heart of Melbourne’s heritage architectural district. You are invited to read Serendipity’s page on the history of Parliament House for more images and information on this breathtaking building.

Check out all of Melbourne's Best Wedding Photo Locations

Do You Pick A Wedding Date Or Venue First?

How to host a bridal shower?

How Do Fashion Photographers Make Money?

What is a rehearsal dinner?

What Should a Wedding Venue Include?

What Is Rose Gold Made Of?

How Can I Have a Nice but Cheap Wedding?