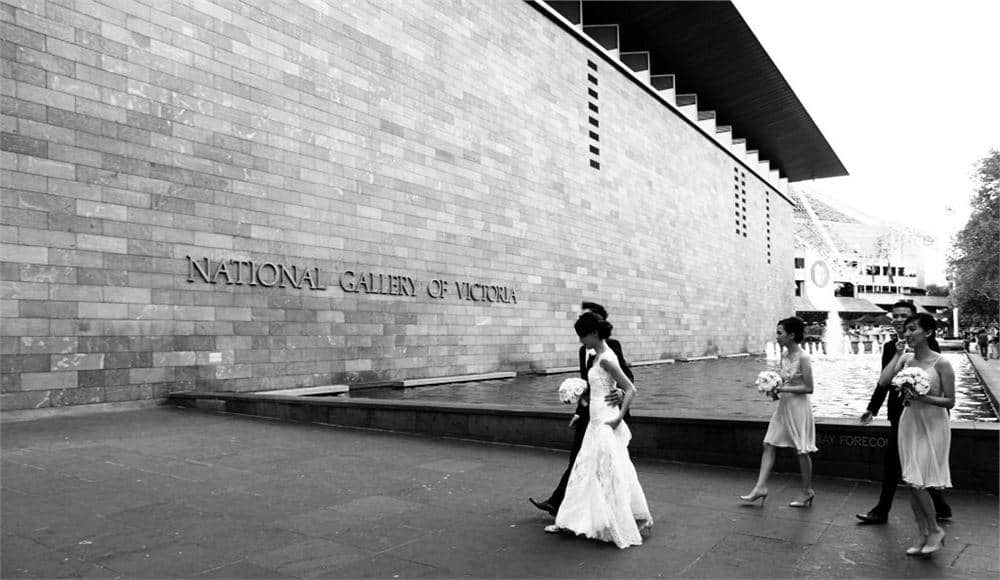 The iconic National Gallery of Victoria, nestled in the heart of Melbourne’s art precinct, along the bustling St Kilda Road, is a fabulous location for alternative wedding day shots. At Vogue Ballroom we are impressed by the galleries rich history and remarkable contribution to the modernist canon of architecture.

The NGV houses an encyclopedic art collection across two sites: NGV International, located on St Kilda Road in the Melbourne Arts Precinct of Southbank, and the Ian Potter Centre: NGV Australia, located nearby at Federation Square. The NGV International building, designed by Sir Roy Grounds, opened in 1968, and was redeveloped by Mario Bellini before reopening in 2003. It houses the gallery's international art collection and is on the Victorian Heritage Register. Designed by Lab Architecture Studio, the Ian Potter Centre opened in 2002 and houses the gallery's Australian art collection.

Founded in 1861, the National Gallery of Victoria is Australia’s oldest public art gallery. Originally situated within the State Library in Swanston Street, the gallery was the first of its kind in Australia. A blessing in disguise occurred when, as both the cities population and the galleries collection grew, it became clear that a new building would berequired to house the ever growing number of artworks. Thus, in 1960, Sir Roy Grounds was appointed as the architect to design the new building to be built on St Kilda Road. Within 12 months, Ground’s drawings for a new museum took shape and the new building was completed six years later. The new gallery on St Kilda Road opened in 1968 to great acclaim, instantly a resounding success with the public. This iconic structure with its many distinctive features, provides a striking backdrop to Melbourne wedding.

In the 21st century, a major fundraising drive was launched on 10 October 2000 to redevelop the ageing facility and although the state government committed the majority of the funds, private donations were sought in addition to federal funding. The drive achieved its aim and secured $15 million from the Ian Potter Foundation on 11 July 2000, $3 million from Lotti Smorgon, $2 million from the Clemenger Foundation, and $1 million each from James Fairfax and the Pratt Foundation.

NGV on Russell closed on 30 June 2002 to make way for the staged opening of the new St Kilda Road gallery. It was officially opened by premier Steve Braicks on 4 December 2003.

The Ian Potter Centre: NGV Australia in Federation Square was designed by Lab Architecture Studio to house the NGV's Australian art collection. It opened in 2002. As such, the NGV's collection is now housed in two separate buildings, with Grounds' building renamed NGV International.

Regardless of whether you are a lover of the arts, you will be sure to feel the rich and significant history contained within the buildings walls. When basking under the sparkling light cast by the entrances waterwall, and enjoying the tones set off by the grand bluestone exterior, you won’t be able to help but get a sense of the architects vision. Sir Roy Grounds was inspired by 18th century medieval structures, such as Castello Sforzesco in Milan. Ground’s design was like a renovated neo-classical palazzo/castle sitting in a moat, but with Oriental overtones, especially given the floating roof and its upturned eaves, the timber gridded ceilings and the Bamboo Courtyard with its fountains, black bamboo and bluestone pebbles, which was designed to relate directly to the collection of Oriental art encircling the courtyard. Other original features of the NGV include the state’s coat of arms above the Richardsonian entry arch designed by Norma Redpath; the waterwall, long derided as a fishmonger’s window, but loved for decades by the Victorian public; the circular lift within its bush hammered concrete core; the Victorian ash panelling in the galleries and foyer; and the Great Hall where Leonard French’s stained-glass ceiling, thought to be the largest in the world, is the baronial climax to this eclectic masterwork of the late Sir Roy Grounds.

If you can tear yourself away from the remarkable entrance exterior, photo opportunities abound over the opposite side of the building. Walk through the spacious gallery foyer, and Great Hall, until you arrive at the alfresco Sculpture Garden– which includes work by artist Matisse, and De Vinci, amongst many others. This extraordinary garden as well as priceless works of art, houses lush grass and shrubbery, secluded seating areas and expansive trees, leafy foliage casts soft dappled light– the perfect complement for your wedding day shots. At Serendipity we are experienced with shooting in Melbourne’s indecisive weather, and feel confident that the attractive and iconic features present both indoors and outdoors at the National Gallery will perfectly set off the desired ambiance of the day. As bride and groom pose naturally in front of the 6 metre high waterwall, subtle light reflections will sparkle poetically in the background of the shot, creating effects that are hard to find elsewhere. The popularity of the gallery means that there is also the opportunity to take shots with plenty of background hustle and bustle, the occasional stylish Melburnian in the perimeters of your shot, will be sure to perfectly capture the essence of Melbourne. Stand out from the crowd in your wedding day finery, in front of a building which this year celebrates its 150th anniversary of standing out from the crowd.

Serendipity highly recommends considering the Great Hall’s– Leonard French stained glass ceiling, if you want to achieve wonderful light filled shots. Standing at 51.206 metres long, 14.325 metres wide and 1.22 metres deep. The sheer weight of the glass meant that the ceiling could not be built flat, and was therefore made of triangular sections projecting downward. The ceiling is made of 224 triangular pieces of glass in 50 colours and took five years to construct. The mosaic like design constitutes the entire ceiling of the great hall, standing underneath, it’s not uncommon to feel transported to an ancient forest. What better place to capture the magic of your wedding day. Vogue loves the soft coloured light effects cast by this majestic stained glass ceiling. The National Gallery of Victoria is a fabulous choice as a photographic location on your wedding day, conveniently located within walking distance from the Royal Botanic Gardens, the Yarra river and many CBD reception centres, this site works as one of several excellent locations to perfectly capture your special day.

Check out all of Melbourne's Best Wedding Photo Locations

Where Are The Best Boat Wedding Venues In Melbourne?

Is a wedding video worth it?

Where Are The Top Warehouse Wedding Venues In Melbourne?

How to Make Wedding Planning Fun?

How do you host a trunk show?

Hold Your Next Christening at Vogue Ballroom

How To Get Married In Australia?

How much to spend on an engagement ring?