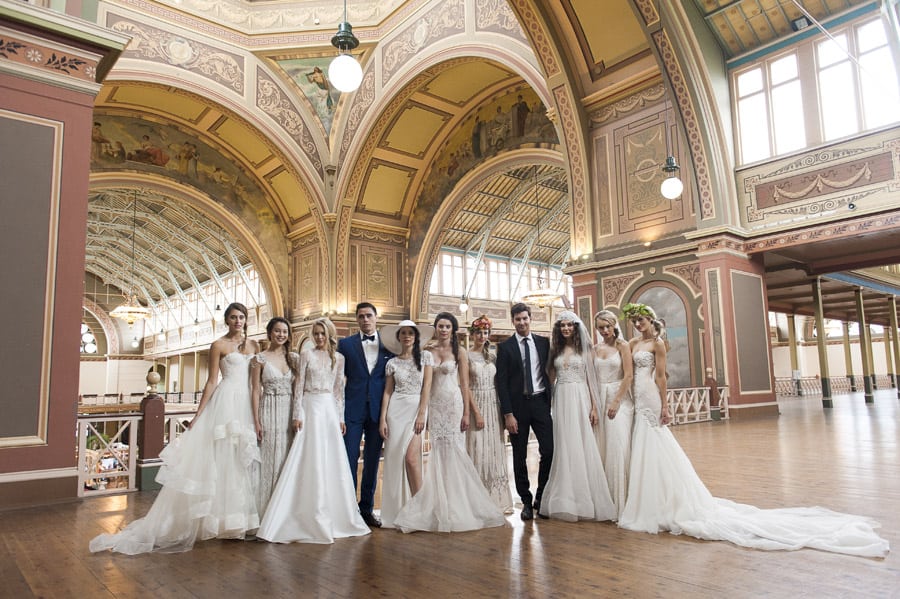 At Vogue Ballrom there are two things we really love; iconic Melbourne architecture and beautiful classic buildings, the Royal Exhibition Building is both, and a fantastic location for wedding photography. The Royal Exhibition Building is in Carlton Gardens which is surrounded by some of Melbourne’s best gardens, and some more great photography locations.

History of The Royal Exhibition Building

The Royal Exhibition Building was designed by Joseph Reed, notable and influential architect also known for the State Library, Trades Hall and the Melbourne Town Hall, as well as Rippon Lea estate, of which regular readers will know how fond we are. Reed’s designs are a mix of classical Romanesque and French Renaissance styles that are intricate and imaginative.

Before the Royal Exhibition Building was erected the grounds were predominantly parkland, and the gardens were established in around 1856, based on designs by Edward La Trobe Bateman. The Carlton Gardens now feature some rare and beautiful Victorian natives as well as beautiful examples of Melbourne’s much-loved tree-lined promenades featuring Moreton Bay Figs and English Oaks. The Victorian Heritage Register has a very detailed list of the various significant plants in the Carlton Gardens in their Latin names, which you can find here, but more than knowing which plants it features and their significant the real beauty is in the design of the garden and its features.

On 3 September 1901, the Countess of Hopetoun, wife of the Governor-General, announced the winners of a competition to design the Australian National Flag. A large flag, 5.5 metres by 11 metres, was unfurled and flown over the dome of the Royal Exhibition Building.

The Free Classical style opens itself to a more liberal approach to architectural expression. Many features of the Royal Exhibition Building were added to represent a vision of a unified and motivated Victoria. Most notably the three plaster heads under the dome depicting an Indian, an Indigenous Australian and a Chinese man. It also had “lunette” style windows (circular or semi-circular windows) depicting the facets of a prosperous country; commerce; industry; science and the arts. There are painted panels of “sylphs” which, to simplify a dated and confusing concept, are elemental representations of a human concepts. A discovery of the old paintings underneath layers of new paint inspired the Museum Victoria to reinstate the Royal Exhibition Buildings previous glory and now the interior can be viewed.

All of these elements show-off an optimistic, ambitious Victoria not afraid to embrace it’s prosperity and creativity in order to encourage more. Very Victoria, and a memento from amazing 19th century Melbourne.

Top 20 City Tours While In Town for Melbourne Wedding

6 Weird And Wonderful Wedding Venues Around The World

What are the stages of a Jewish wedding?

What comes first at a wedding reception?

Can I store my wedding dress in a plastic box?

What do older brides wear?

Does my wedding need a theme?